Are YOU up for the RunDisney Princess Half Marathon?

In 8 days there will be thousands of women (and a few men) huddled around their computers at 12noon EST on July 14th, 2015 to register for the 2016 Princess Half Marathon that is held on February 21st, 2016.

This overly popular race draws thousands of women annually to Disney World to race and show their ‘Princess Worth’ and finish.  Most of these women are dressed as a Disney character, usually a princess (some of the men are dressed as Princesses and Princes as well).

Yay!  You get to be a Princess for a weekend (and dress like one), You get a commemorative shirt, a commemorative mesh bag, a personalized bib with your name on it, a post race snack box, post race drinks, an awesome post race medal, Multiple Picture opportunities with Princes, Princesses, and other characters…

But its very expensive.  The cost of the race does not include any tickets into Disney nor hotel stays.  Any extra items you want, you have to purchase at the expo.  If you don’t purchase some pre-weekend either on http://www.active.com or when signing up on July 14th.

Registration:
I have heard varying stories over the years, but in July 2014, the 2015 Princess race was sold out around 4/5pm.  My friend and I logged on to our computers around 12:15pm (I was at work yelling at the computer btw while my coworkers laughed at me) and the ‘hold’ was on.  It was gridlocked on www.active.com and it took around an hour to actually get into the system.  Once you get in, you have 15 minutes to completely check-out, including picking all commemorative items, etc, or you lose your place in line.
The Glass slipper challenge (choosing to race the Half and 10k in the same weekend) filled up in under 2 hours.  The other races were not far behind.  I think the kids races and 5k were about the only things that didn’t sell out within 24 hours.
BTW this is why Disney can charge what they want!  People will pay it.

Have your active.com account already set up before you get there and have your credit card ready.
But don’t fret!  If you don’t get your ticket, sign up with a charity or see if any travel agencies have tickets.

It’s a packed race!
For some, this is the only Disney race they’ll run.  For some, its their first ever half marathon.  There were 20238 finishers of this race in 2015.  That’s a lot!  They say around 25000 sign up.  Some don’t show up to run due to emergency or injury.  Some don’t finish the race and are picked up by the dreaded ‘sweeper’.

This race is packed.  But there are corrals.  They start around 5:30am and each corral is let out every 3 minutes with a fireworks display.  Last corral starts around 6:30am.  I have been at plenty of races that told me to stand by my pace sign pre-race, but none that regulated it.  The Princess Race regulates this.  This upcoming year you have until November 17th to report a race time from a certified race, 10k length or over, that was done in the last year for your corral placement.
I do recommend that you do everything in your power to get a good corral time.  No matter how slow you think you’ll run this race, if you can submit a good corral time, you will have a less crowded race.
Runners from around corral L or M on back were at a standstill at the 6 mile mark where you run through the castle due to the mass numbers.
Last November my running partner and I raced together a certified Turkey Trot 10k so we’d have the same corral placement and a good one.  We got lucky and were placed in Corral E!  Happy Day!

Here’s a picture of us standing in our Corral

Pacing
There are Balloon ladies.  There is a sweeper.  If you fall behind the balloon ladies, who do not start until the last person goes, and they keep a slow 16 minute/mile pace, you will be swept.  These are dreaded.  But if you can get yourself a high corral, you can go pretty slow and still not worry.  The rules of the course is 16min/mile.
Disney closes down all the roads into the parks around 5am for this race.  If you haven’t arrived for the race by then (no matter what time your race time should start due to corral), you likely won’t get in.
They then have to open all those roads for parkgoers to enter, so if you are on certain portions of the course that are being opened to traffic, you will get swept.

Word to the wise:  Do not mistakenly think that as a spectator or runner you can get on site by leaving your hotel later than 4:30.  Once the roads close, nobody, runner or not, gets in.  We had a few girls at our hotel mistakenly think that since their corral wouldn’t actually go until around 6:30 they could wait until 6 to arrive.  They were sorely mistaken when the bus drivers could not get them to the parks due to these closures.

Planning ahead
After you have registered for your race, you’ll want to secure a room.  If you watch the Disboards forums, you’ll see when rooms start to open up.  Easier than that, contact a travel agent and have them watch for you.  If a better deal comes available you can always make changes.  Usually the discounts for that time of year come out around September.  The rooms are open for booking now.
Remember, you can book now and change reservations as needed without penalty.

When should we go?
When thinking of timeframes of going (as this time of year many are still working), consider things such as not wearing your legs out the day before the race by walking parks all day.  Consider that you’ll want to walk the parks to keep your legs active after the race.

Consider that every Cast Member in the park will congratulate you as they see you walk by with your medal on.  Its something that makes you feel so special for the weekend.  You’ll see many of your fellow Princesses doing the same.
I chose arrival on Friday and leaving Tuesday so that we had most of the day Friday after the Expo, and most all day Sunday and Monday in the parks.

Picking an outfit.
You are very welcome to run in normal running attire.  However you will be in the minority as the women run in this race dressed as their favorite Princess.  I dressed as Jasmine.  Had fun picking out and creating my outfit!  I learned how to make a tutu! 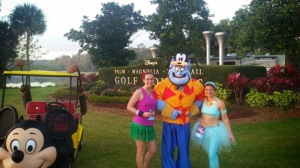 Will I PR?
You can do whatever you want.  Most women get swept up into stopping for photos… and this will slow you down.  Especially as the lines get longer.  If you find a short line, its worth it.  But the winning runner in 2015 had a time of 1:22, so yes, it is possible to PR if you avoid the stops.

However many of the women are doing this race for the experience. So PR times are thrown to the wind, and completing a 13.1 mile race walking, running, stopping for pictures is more valued. There are some awesome Youtube videos out there on this.

So if you choose to do this race, those are the skinnies on it 🙂

Need beginner half running tips?  check out my blog post on Stage 1 of running the Avl/Biltmore half