Little River Canyon Half Marathon; A Chattanooga time for an Alabama Race

We traipsed off to the Southwest this weekend with a plan.  Run a race in Alabama to knock another state off of my 50 state list, and then go visit somewhere I haven’t really explored; ie Chattanooga.  There was a blur of a week in 2000 when I traveled with the Montreat Women’s soccer team to Chattanooga for their preseason week of practice.

We had an off Friday night from games, so we left as soon as we got home from work for the 4.5 hour trip to Alabama.

This started with an hour time change, which helped us get an extra hour of sleep on Friday night.

The Little River Canyon Half Marathon in Fort Payne, Alabama is the home of Randy Owen, the lead singer of Alabama.  And let me tell you the downtown area is very decorated with Alabama.  This was pretty special to see because I grew up listening to Alabama.  It is approximately 1 hour south of Chattanooga, TN. 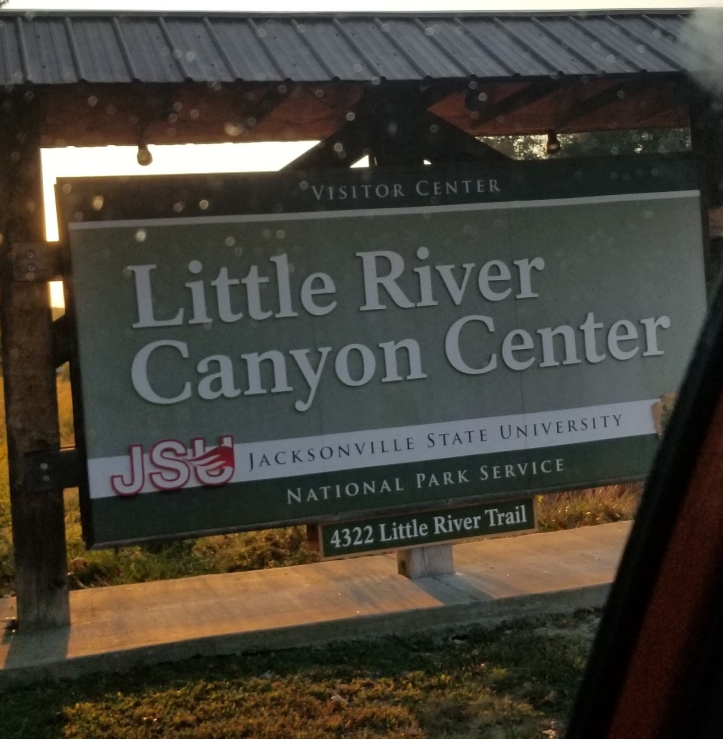 I picked this race because 1) we had Friday night off from work, 2) it was not very far away and Alabama was a lonely hole in my 50 state map, 3) only $50 per person for a half marathon, 4) running along the rim of a canyon sounded pretty awesome 5) low attendance numbers were a pro and con- less support, but maybe higher chance of winning an award??

Cons were the hills and projected heat.

Our hotel was a Hampton Inn in Fort Payne, Alabama.  Google maps said this was a 17 minute drive to the Canyon River Center.  We got the boys up and got their breakfast at 6 at the hotel, and then returned them to their room with their xbox and electronics connected.  I picked a room in the app that would be close enough to a fire exit in the case of an emergency, but not in a high traffic area.  Do not let me confuse you here… my kids do not love hanging out and watching us race or cheering us on.  Why I don’t have cheerleader kids, who knows.  And this was our promise to them for taking them from home all weekend that they could have that time to do this (questioning our parenting yet?   Lol).

We left the hotel room around 6:45am and drove to the center.  There were cars arriving the gravel lot alongside us.  We walked up the path to the center and got our packets (this included our bib and a soft cotton T-shirt).  Snapped a few pre-run photos.  It was a beautiful center inside and out.

We took everything back to the car, went through our pre-race routines, filled our hand held water bottles (I had a mix of Isagenix hydrate and Ionix in mine) and headed back up to the center.  And the pre-race bathroom visit (you know I have to bring THAT up).  Guys, the bathroom was empty when I walked in 20 minutes before there race!!

There was a pre-race meeting at 7:45am to go over the map on a power point presentation as well as discuss any heat concerns.  This was actually a great idea and helped keep everyone on the same page, knowing where water stations would be as well as the cold towels.  But smashing 91 runners into an auditorium for this was way easier than if it was a 500+ runner race.  It was a great way to see the race director’s face and personalize him a little.

Back out to the start line at 7:55am.  The lizard suit gave us entertainment.  The Mayor of the City gave a pre-race speech as well.

And off at 8am on the dot.  We started as a group with 3-4 people width.  We ran across the road (police stopped traffic) and to the Canyon Rim Road.  The hills were rolling, not steep along this road, but present.  Nothing flat.  It was obvious after crossing the road that we would be in single file lines as most everyone seemed to be running their own race and at so many different paces.   It was shaded and under the trees on pavement.  Around mile 2 at the ‘Mushroom’ where the road splits temporarily, was the first water station.  They happily handed out water or Gatorade.  I took a quick pic, drank some, and went on. 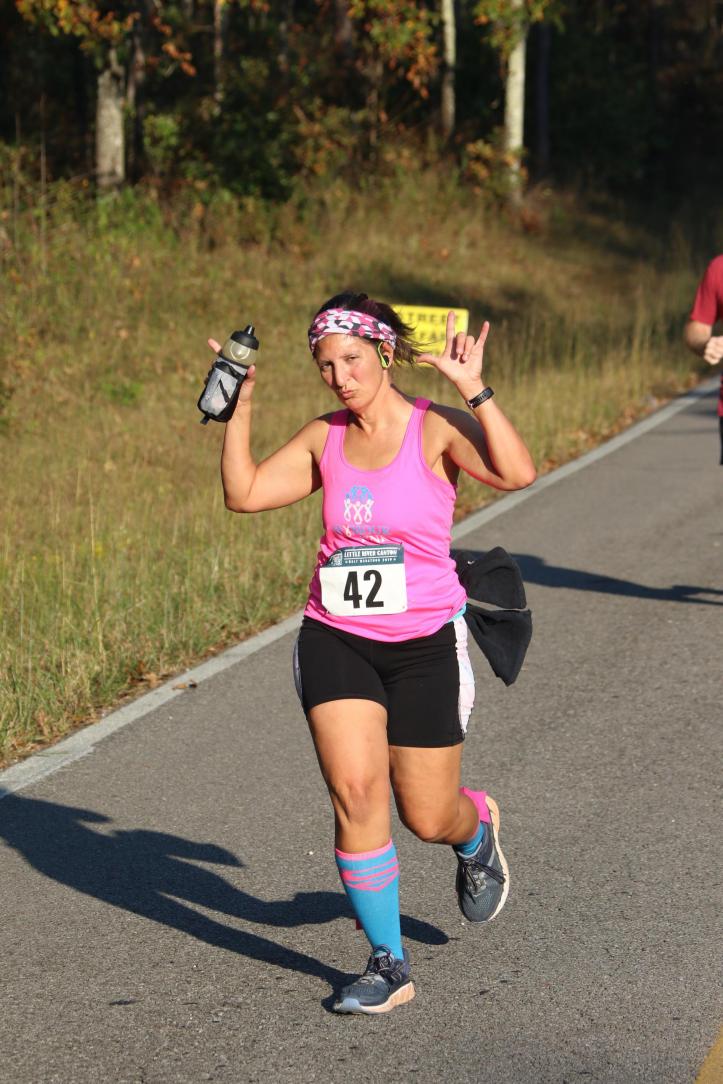 At this point the hills made it hard to see who was in front or behind me outside of a few runners that I passed or passed me back and forth.  I had a hard time figuring out where I fell in the pack outside of my own pace.  At one point, I told myself that if I was in the back of the back and bringing up the rear, so be it.

We passed a few view points/lookouts, but we skipped stopping at them.  Kept moving.

Hydration wise, I continued drinking sips of my water bottle from the get go.  I was afraid of getting dehydrated and knew that the potential high of 92 degrees would be worrisome.  During the race I don’t believe it got above 80 though.

At mile 5, right before reaching water station 2, I drank half of my Isagenix e shot.  Then I reached the next water station right before turning off of Rim Road.  At this water station there was water, Gatorade, and Gu.  I grabbed a Gu and some Gatorade and kept moving.  But straight uphill.  I passed a few people on this hill (thank you WNC for giving me training hills) and kept on trucking.  I definitely did walking and running here as this hill was a solid 2 miles up.  It also moved out of the shade of the trees.  At 9am it was hot, sun bearing on us, and running straight up.  Sounds great, right?

At mile 7, we turned off onto the ‘lollipop’ road (as the race director called it) and there was a water stop with Gatorade, fig newtons, other snacks, and ice towels right in front of Randy Owen’s house/gate.  He unfortunately was not out handing out snacks.  It was indicated that they sometimes do come out and do that for this race.

We continued on the lollipop road that makes essentially a lollipop and reconnects to itself over the course of 3 miles.  This road was open to the sun as well and passed beautiful country views with more mile inclines and declines.

At mile 9, my Gu was empty and I pulled out my small pack of Hylands Leg Cramp relief pills.  There are 4 pills in a pack.  I took 1 pill at each mile from 9, 10, 11, and 12.  I have found that if I start early enough, the cramps do not get unmanageable during my runs with these pills. 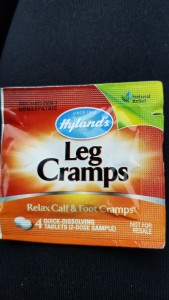 At mile 10, we were back at the same water station again in front of the Owen’s home and I got a new cold towel and kept on trucking along in my walk/run fashion by this point.

Taking a right back out on the main road, we turned right onto a more back road old pavement style road that was thankfully mostly downhill for that mile.  Turned left and had rolling hills again for mile 11-12.  Water station at mile 12 gave me more Gatorade to get me through.  At the end of that road, we turned right onto Hwy 35.  A cop directed our turn but instructed us to stay on the white line or to the right of it.  For a half a mile I ran straight uphill again.  At the crest of the hill I was a mile marker 12.5 and it started down.  I crossed the road and finally had the Canyon Center in sight again.  There was a girl on my tail at this point (I couldn’t decide if she was in my age bracket or not…hahaha…) so I did my best to use her as motivation to stay ahead of her.  She did pass me at one point after we turned into the Canyon River Center drive, but on the next hill, I dug in my heart and pushed past her.  People were cheering us.  Guy 1 says ‘keep going you only have 1 tenth left!  I see Conrad running up to get my picture coming up the hill. 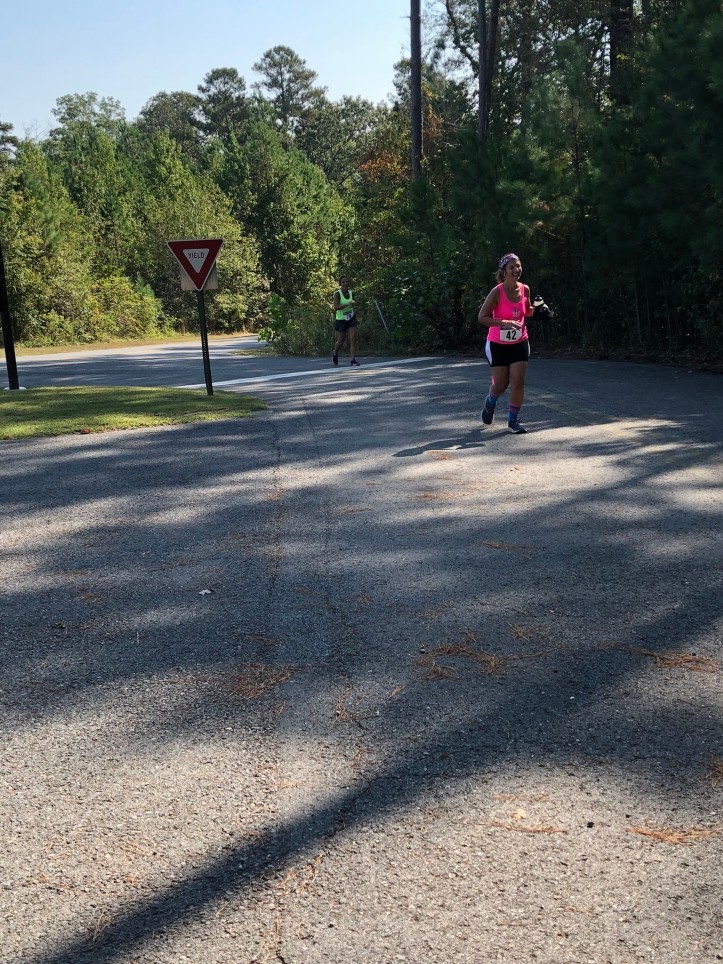 I get up a little further (another tenth) and another guy says the same thing ‘you only have a tenth left!’  I responded back in jest ‘that’s what the last guy said’.  So he jokingly responded ‘He lied- you really are only a tenth away now’…lol.  And at some point here, I stopped seeing the girl I was pushing past in my peripheral view, so I knew I was ahead, but hopefully long enough to get me to the finish.  So we had to loop around through the trees before coming to the front of the Canyon River Center to the finish line.

The finish was surreal.  Someone put the medal around my neck and a kid was handing out cold towels.  They also handed out numbered cards that requested I  put my name, age, and time down.  My card was numbered 61.  I was done.  It was hard, hot, hilly.  After walking it off a little, I completed my card and turned it in.

The food table was set outside of the Canyon River Center under the awning.  Runners were populating the area and resting in the porch swing, on the floor, indoors, against the wall…

And there was pickle juice.  So you may be thinking that you don’t understand the relevance.  But this was probably the first ever race I’ve attended that had pickle juice at the finish.  While pickle juice may be a better on course idea, to have this at all was an excellent idea.  As an athletic trainer, I keep pickle juice on my sidelines to help cramps disappear.  These, like mustard packets, Tabasco sauce, and a few other nerve shocking fluids are great for that. 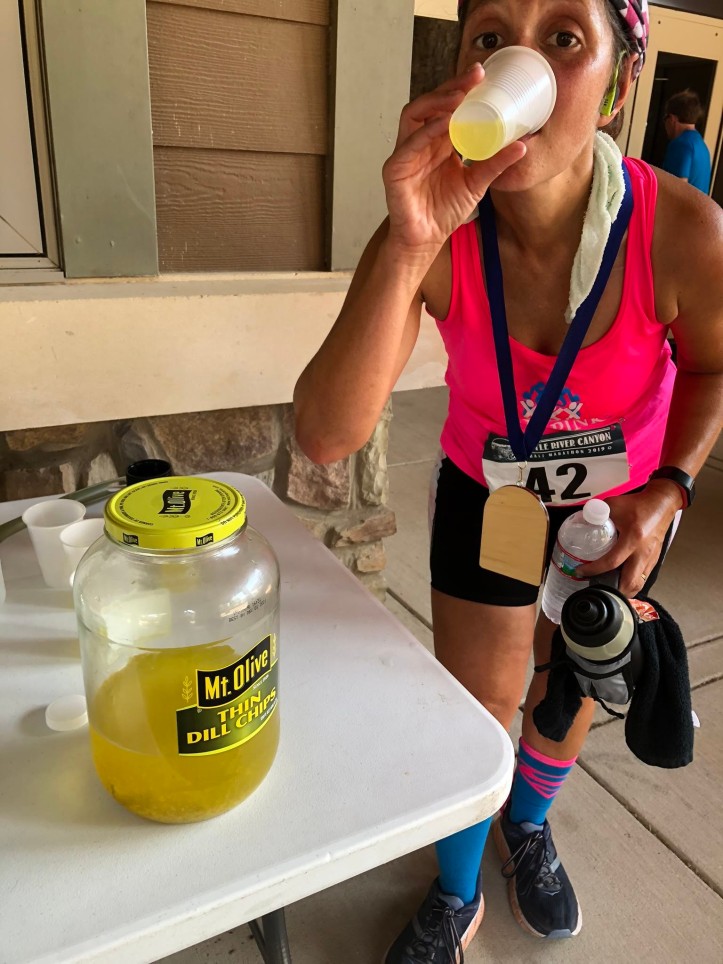 Over the next 30 minutes, I worked on eating a couple of pieces of pizza and drank water and Gatorade.  I made a friend while sitting there with a lady who was from Birmingham, Alabama who was staying at the same hotel we were and needed to leave.  We chatted about our Disney races and other similar events we had done.  Her son played baseball an she needed to get back home to see his game.  So we checked the results and learned that she was in 4th place in our age group and I was 5th.  We were disappointed but knew we could go ahead and get back. 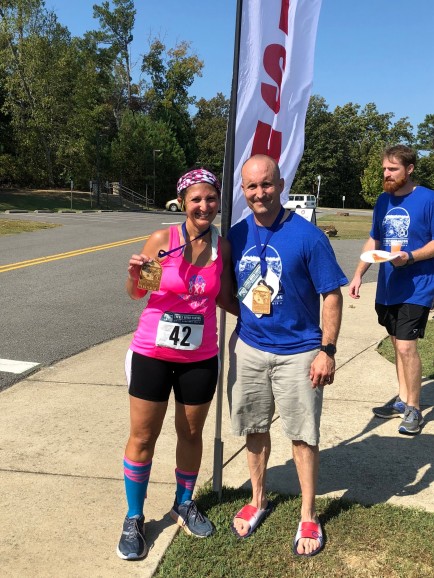 Overall, it was a great small race to be involved with.  The people and location were spectacular.  Would be nice to have more on road support outside of the water stations and the police.  It was very quiet and serene.  I was happy to have my water bottle and a towel in hand during the race as well.

We took the long way back to the hotel and drove down the Canyon Rim Road and took some photos at the overlooks to see what we ran past.  Conrad had historically done some high angle rescue training at this very location a few years ago so some looked familiar for working the cliffs there.

Our hotel was gracious to give us allowance of a few extra checkout minutes from our room and we were back, showered, and out of the room by 12:15pm.  The boys were happy and fine and off to Chattanooga we went…